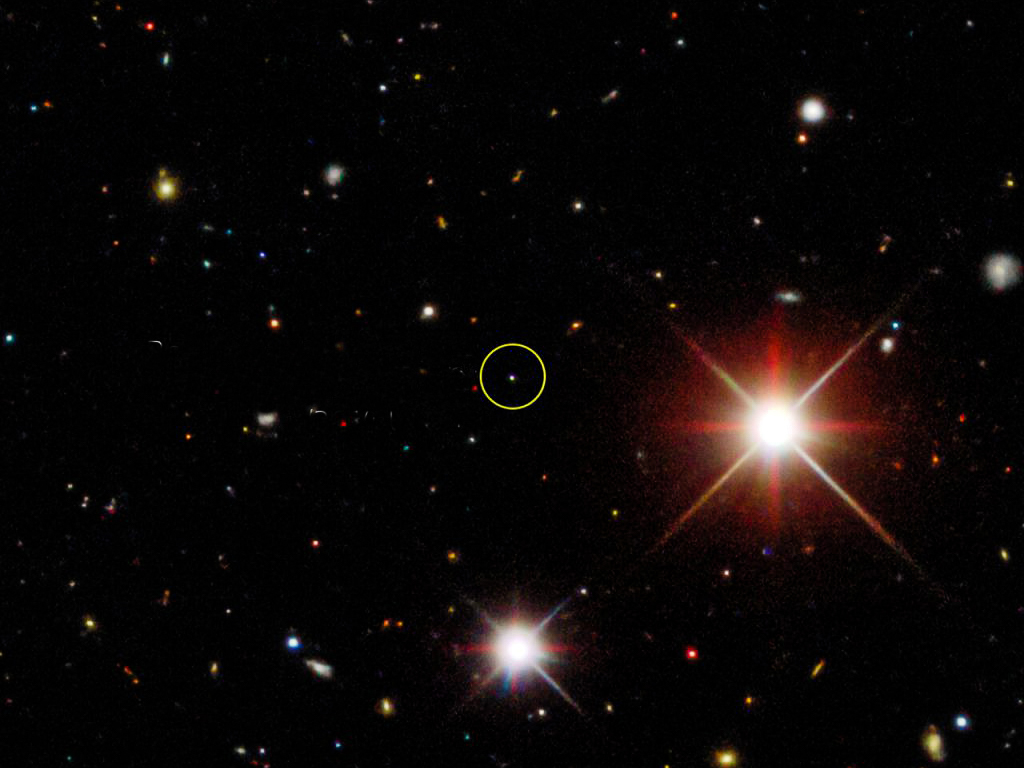 A Giant From Ancient Times

Astronomers have discovered a giant comet that points to both the past and future – it could shed light on the origin of life, but it is also a cosmic image of human enterprise.

Not infrequently, it is coincidences that lead to discoveries. This is also the case here. Astronomers Pedro Bernardinelli and Gary Bernstein searched for minor planets beyond Neptune’s orbit. For this purpose, they used large-scale images out of the Dark Survey Project from the telescopes in the Atacama Desert in Chile. In a photograph from October 20, 2014, they found a mysterious phenomenon – a diffuse, glowing dot changed its location from one image to the next. The Hubble telescope and other highly sensitive astronomical light catchers gave researchers certainty: it was a comet – a comet of unique proportions. At the time of its discovery, the wayward star was four billion kilometers away, beyond Neptune’s orbit. Never before has a comet been discovered at such a great distance. This is due to another special feature – the calculation showed that the comet, with a diameter of about 150 kilometers, is ten times as large and a thousand times as massive as usual comets. A third special feature is its diffuse glow! Experience has shown that comet nuclei do not begin to form the so-called coma – a gaseous luminous sphere millions of kilometers in size – until they have crossed the orbit of Jupiter. At this proximity, the solar wind is strong enough to blow dust out of the comet. Bernardinelli-Bernstein, as the comet is currently called, is ten times further away and yet already displays a gas envelope. How is this possible? To do this, it must be a young, fresh comet that has never been exposed to the solar wind and had to exhaust itself. It cannot reappear every 75 years like Halley’s Comet, consuming itself, but rather it must come from the cosmic home of comets, the Oort Cloud. According to astrophysicist Suzanna Randall, its brightness is an indication that it possesses an unusually large number of volatile elements. Bernardinelli-Bernstein is a «sample, in its original packaging, from the Oort Cloud».

A Message From The Beginning Of Time

In 1950, the Dutch astronomer Jan Oort used the orbital data of many comets to hypothesize a cloudy comet sphere around the solar system. Comparable to a placenta, the solar system is embedded in billions of small comet nuclei, some of which embark on the infinitely long journey to Earth. Their substance comes from the origin of the evolution of the planets, which is why the astrophysicist Gustav Tammann calls them the ‹firstborns›. Just as this view into the depths of the universe leads to its early time, so the comets bring substance from prehistoric times to Earth. The cosmos is the present manifestation of the past, and in the comets, this becomes materially tangible. However, another name has become established for the comets: Fred Hoyle called them the ‹dirty snowballs› because in fact there is no darker substance than that of comets. Now, this firstborn is on his way to the solar system, and it will take until 2031 to reach his closest point to Earth. Then the comet crosses the ecliptic beyond Saturn’s orbit. Depending on how many gases are produced when the icy surface evaporates due to the sun’s heat, Bernardinelli-Bernstein could shine so brightly in the night sky that it will be visible with binoculars, despite its distance. After that, this «freedom hero of the cosmos», as Rudolf Steiner called the comets, will continue to follow his path for another 10 or 20 years in the northern sky, recognizable to the eyes of the telescopes.

This long period of time, in which the comet giant is ‹close› to Earth, has inspired the spaceflight agencies NASA and ESA to send a probe to the guest from prehistoric times. If the launch is before 2029, the probe would then be with the comet in 2033. Material samples from probes to comets Wild 2 and Juri have detected glycerin and phosphorus, two substances of life. This supports the theory that the building blocks of life, comparable to cosmic fertilization, came to Earth from comets in the early days of Earth’s development. According to astrophysical calculations, this would have been 3.8 billion years ago. Bernardinelli-Bernstein is thus old and young at the same time. He is old because he probably stayed in the local cloud for eons before he began his journey into the planetary system. He is young because his substance is original, telling of the beginning of the Earth. A spiritual comparison: you get a diary entry, which you wrote at a young age. The note has survived for many years and is therefore old. At the same time, it is young because it proclaims the origin of its own ideals.

Comets travel far from the ecliptic. Because gases can escape, a piece comes off, and its path is never wholly calculable. Nor is it clear how bright they will become, how far they will be, or how colorful their tail will appear near the sun. Being so unpredictable, they are a cosmic image of everything that happens beyond routine and convention. Each initiative runs antithetical to an established course of things, which is why Rudolf Steiner rightly understands comets as representatives of initiative. This is especially true for comets such as Bernardinelli-Bernstein, which occur once or only in very long periods of time. The situation is different with tail stars such as Halley’s Comet, which has been ‹haunting› the Earth every 75.3 years for over 2,000 years. It’s like an initiative notoriously repeated by someone. What was first fruitful, at the wrong time, turns into its opposite. Bernardinelli-Bernstein is not one of these. If you take its course over 30 years as an image, it is not a sparkling, short-lived sensation, but one of those initiatives that faithfully and with perseverance inspires life for an entire generation, with freshness and originality. Just as the comet can hardly be seen in the darkness of the cosmos, so it may be with some of the initiatives that this giant from prehistoric times impulses – they too may be overlooked in the darkness of war and injustice.

Previous
The Winemakers Have The Floor!

Next
Research In The  Garden Of Childhood